After setting my Default Processor Architecture to x64 in Visual Studio 2013 I started getting System.AccessViolationException’s. 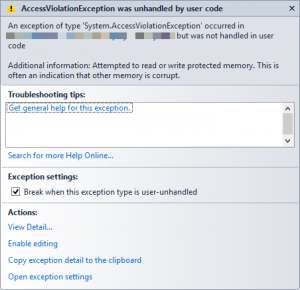 Notice the “this is often an indication that other memory is corrupt”.

After exploring the exception. The root cause revealed itself. Visual Studio crashed and restarted. After that everything was fine again.

I did remember rebooting my machine in the process of reproducing the exception. The only setting that seemed to cause it was the Default Processor Architecture. Maybe a corrupt (memory) file. But I’m back to working hard again.

Working in a DevOps team is the best thing that happened to me. I like challenges and sharing the solutions with others. On my blog I’ll mostly post about my work, but expect an occasional home project, productivity tip and tooling review.
View all posts by erictummers →
This entry was posted in Tooling and tagged exception, visual studio 2013. Bookmark the permalink.