Writing a unit test is all about isolating the code under test. The best way to do this is by using interfaces. An interface only described the methods and properties, but lets you change the implementation as long as you use the same signature.

The default framework objects are no exception, except there (almost) never is an interface defined. Isolation something like System.Random in your unit test can be hard. Here’s my way of doing it.

First I’ve defined the interface for the Random object. In there are the public methods my program needs. The System.Random object does not implement this IRandom interface. I have to do this myself. More on that later.

Using this interface I can replace the Random object with a stub. More on that later too.

Another interface defines the constructors of the Random object. I’ve defined a Create method for every constructor of Random my program uses. This interface is the key to my isolation method. 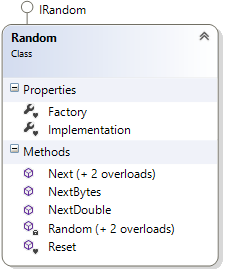 In my own namespace (Company.SystemIsolation) I create the Random class that implements the IRandom interface. This is the object my program is going to use.

In the Reset method the Factory property is set to the SystemRandomFactory defined below, for now all you need to know it results in using the System.Random.

The Factory property is static and is used to create an instance saved in Implementation in the constructors of the Random object.

Every method in the IRandom interface is implemented with a redirect to the IRandom method of the Implementation property.

Still with me? The hard part is over, just soak up this last two default implementations and you are in isolation zen. 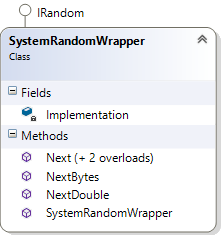 As stated above the System.Random object does not implement our IRandom interface. This can be solved using the wrapper design pattern.

The System.Random object is passed into the constructor to instantiate the Implementation member.

For code cleanliness I’ve created a static class for replacing the Factory in the Random class. The method is called Isolate and takes an IRandomFactory parameter.

To use the isolation in existing code do a find-and-replace of System.Random with SystemIsolation.Random. Maybe you need to fix some references, but the idea is the default behavior remains unchanged. Now you gained a way to isolate your tests from the Random object.

This all seems like a lot of work and it is. Using a code generator can do the big chunks but you will always need some manual labor. But when you are done, you can use it again and again in all your projects. I’m expanding my isolation library on every project and happily reuse my hard work from older projects.

Working in a DevOps team is the best thing that happened to me. I like challenges and sharing the solutions with others. On my blog I’ll mostly post about my work, but expect an occasional home project, productivity tip and tooling review.
View all posts by erictummers →
This entry was posted in Test and tagged design pattern, isolation, random, Rhino mocks, stub, unittest, wrapper. Bookmark the permalink.